We're Getting Mutants in the MCU - The Loop

A good Master Of Ceremonies (MC) is essential to a successful Skepticamp event. If there is going to be more than one room, then you need an MC for each room. The role of the MC can vary, but at a minimum it should include:

(1) Some brief opening remarks at the start of the day, which should include a brief description of the physical layout of the venue, including where the lavatories are located. It is also a good idea to introduce the other organizers of the event and any personnel who people can turn to with questions.

(2) Introducing speakers. This is really optional, but can serve an obvious purpose.

(3) Keeping Speakers On Time to start and finish their presentations. Depending on the complexity of the schedule, you might want to have separate timekeepers, but the MC needs to be the "muscle" to give the speaker a warning and then to force them off the podium if they are running late. One of the most effective ways to do this is to stand up and say "lets have a big round of applause for [insert speaker's name]." This is probably the MC's most important duty. Speakers at Skepticamps often tend to run few minutes long, which can wreak havoc with the schedule.

(4) Moderating discussions and questions. This is another key role. The speaker should solicit questions, call on questioners, and keep the questions moving. This will help insure that a greater number of people can ask questions and can keep things from getting acrimonious in the rare event when the speaker and the questioner get into an argument.

(5) Providing light entertainment. A prepared MC can keep the audience interested and engaged in between speakers with interesting stories, jokes, anecdotes, trivia questions, and a multitude of things.

Selecting MCs: The MC has to realize that the MC role is their job for the day. They should probably not do their own Skepticamp presentation. Unless it is a very small Skepticamp, the main conference organizer should not be the MC--a multitude of issues can come up that will need the main organizer's attention. Obviously the MC has to have good public speaking skills, must be capable of being assertive, and must have the capability to appearing friendly and jovial while doing their job. If the MC can be someone that is well known in your local skeptical community, that is a plus. Also, the MC needs to be someone who can check their own ego at the door and accept the instructions of the main conference organizer in the unlikely event that there is some kind of dispute. If you do not think that an MC candidate is capable of looking at the conference organizer and saying "okay, you're the boss," then you have the wrong MC candidate.

(1) Be prepared. You should know what you are going to say for the opening and closing remarks before you get up there. You should also have your own copy of the schedule at hand at all times.

(2) Act the part. Even if it is not your normal inclination, an air of jovial authority at all times is helpful. This is just as true for the times when you are at the podium as when you are not.

(3) Dress the part. Dressing for success can greatly add to your air of authority. Most attendees will likely be dressed in very casual attire, so dressing well can be very effective. Male MCs should, if at all possible, wear a suit and tie, or at a minimum a jacket and tie. Female MCs should wear the equivalent form of professional attire.

(4) Arrive early and make sure everything is "teched out." Someone else should be responsible for AV, but ultimately you will be in "control of the room." You need to get there early to make sure that the microphones, projector, and other AV equipment is up and running, and make sure that you know how to run them.

TODO for this page

More crap to migrate from the old wiki

The organizers open the day by explaining how the event will proceed, how the schedule will be determined and when breaks will happen. Be clear that skepticamps are interactive affairs, meaning that speakers should be prepared to take questions during their talks.

Encourage civil and polite discussion, especially if you've invited speakers who are unfamiliar with skepticism or traditionally distrustful of it.

Keep to the schedule, as attendees will grow restless and annoyed at any breach of the expectations you had set out at the start of the day. If necessary, cut off speakers who go long. Encourage tangential discussions to move into the hallway or an open room.

Try to fit in as many talks as the day and venue will allow.

Wrapping up, thank the sponsors, the organizers, those who gave talks, and especially the attendees who joined you for the day. Remind the attendees that the first rule of skepticamp is to talk about skepticamp. Ask the bloggers to write a post about the event. Ask non-bloggers to review and recap the event in the skeptic forums they frequent.

Encourage those who didn't offer a talk to start working on one for the next event. Ask if anyone is interested in helping to organize the next event.

Ask that photos be posted on Flickr (or similar) tagged with both 'skepticamp' and a tag associated with your specific event ('skepticampcolorado2', e.g.) Ask those who gave presentations to post their presentations to slideshare or a similar service.

Finally, ask everyone to assist in the clean up to leave the place as you found it. Then head out to socialize!

Write to your sponsors to thank them. Be sure to let them know what transpired, pointing to all the reviews, recaps and pictures.

Talk with your fellow organizers a few days after the event. Assess what went wrong as well as what went right. Record it all in a Lessons Learned section on your Event Page where future organizers can benefit from your experience.

Don't be troubled by minor problems. Skepticamp is an experiment where the unexpected will arise in spite of your best laid plans. Consider your event a success if you had fun putting it together and the attendees enjoyed the day. If everyone learned something and grew as skeptics, then consider it a big success. 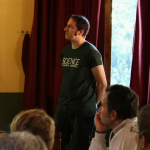 Comments
Other Languages:
Community content is available under CC-BY-SA unless otherwise noted.